Donya Douglas-Bradshaw joined NASA as a co-op student, and is now the ATLAS instrument project manager. She was always drawn to science and math during her early school years, and had a keen interest in how things worked. By the age of ten, she knew she wanted to be an engineer. Her goals in her high-school yearbook were to marry her high school sweetheart and work for NASA. So, during her second year of college, when she was selected for an internship with NASA Wallops Flight Facility, she eagerly accepted. More than twenty-five years later, she’s still living the dream. 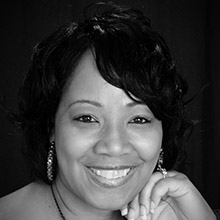