ATL07/10 sea ice data are referenced relative to a mean sea surface (MSS), as described in the ATBD (https://doi.org/10.5067/UAZPI91070H4). The MSS is derived from CryoSat-2 sea surface height retrievals during 2011-2015 (Kwok and Morison, 2015) with gaps and lower-latitude ice marginal regions filled using the DTU13 global high resolution MSS (Andersen et al., 2015), which is based on multi-mission satellite altimetry from 10 different satellites over 20 years (1993-2012). The composite data are smoothed using a 25-km Gaussian kernel after a reference ellipsoid bias correction (WGS-84 for CryoSat-2 and Topex/Poseidon for DTU13). The MSS is in a mean tide system. Heights are above WGS-84 reference ellipsoid.The raw MSS data (Arctic and Antarctic, 2.5 km x 2.5 km grid) have now been made available on Zenodo: https://doi.org/10.5281/zenodo.4294047.

Data are in the process of being provided through the National Snow and Ice Data Center (NSIDC), but we provide here the monthly gridded datasets and an example along-track data file while the official NSIDC data repositories are being finalized.

The gridded product contains monthly sea ice thickness estimates derived using ATL10 together with the redistributed NESOSIM snow data, along with core ancillary data including gridded ATL10 freeboard, NESOSIM snow depth and density, OSI SAF ice type, mean day of the month, number of valid days of data in each bin, and the total thickness uncertainty (the mean systematic uncertainty at this scale), with the example output for April 2019 given below. These gridded data are produced by binning the along-track data (just from beam #1 in this initial data release) to the 25 km NSIDC polar stereographic projection (EPSG:3411). A single NetCDF file is provided for each month from November 2018 to April 2019.

The along-track thickness product includes the various sea ice thickness estimates, ancillary data, and individual (random and systematic) uncertainty estimates to enable more comprehensive evaluation of the data for the more advanced user. Two data files are provided for each associated ATL10 granule: (i) A raw along-track dataset posted at the same variable segment-scale resolution as ATL10 (along-track resolutions of tens of meters) and (ii) a smoothed (200 segment mean) dataset. Two NetCDF files will thus be provided through the NSIDC for each ATL10 granule (raw resolution and 200 segment smoothed) covering the period October 14th 2018 to April 30th 2019. In the zip file below we include an example of these along-track datasets and associated browse image for testing purposes. If more data are urgently needed then please get in touch (alek.a.petty@nasa.gov). 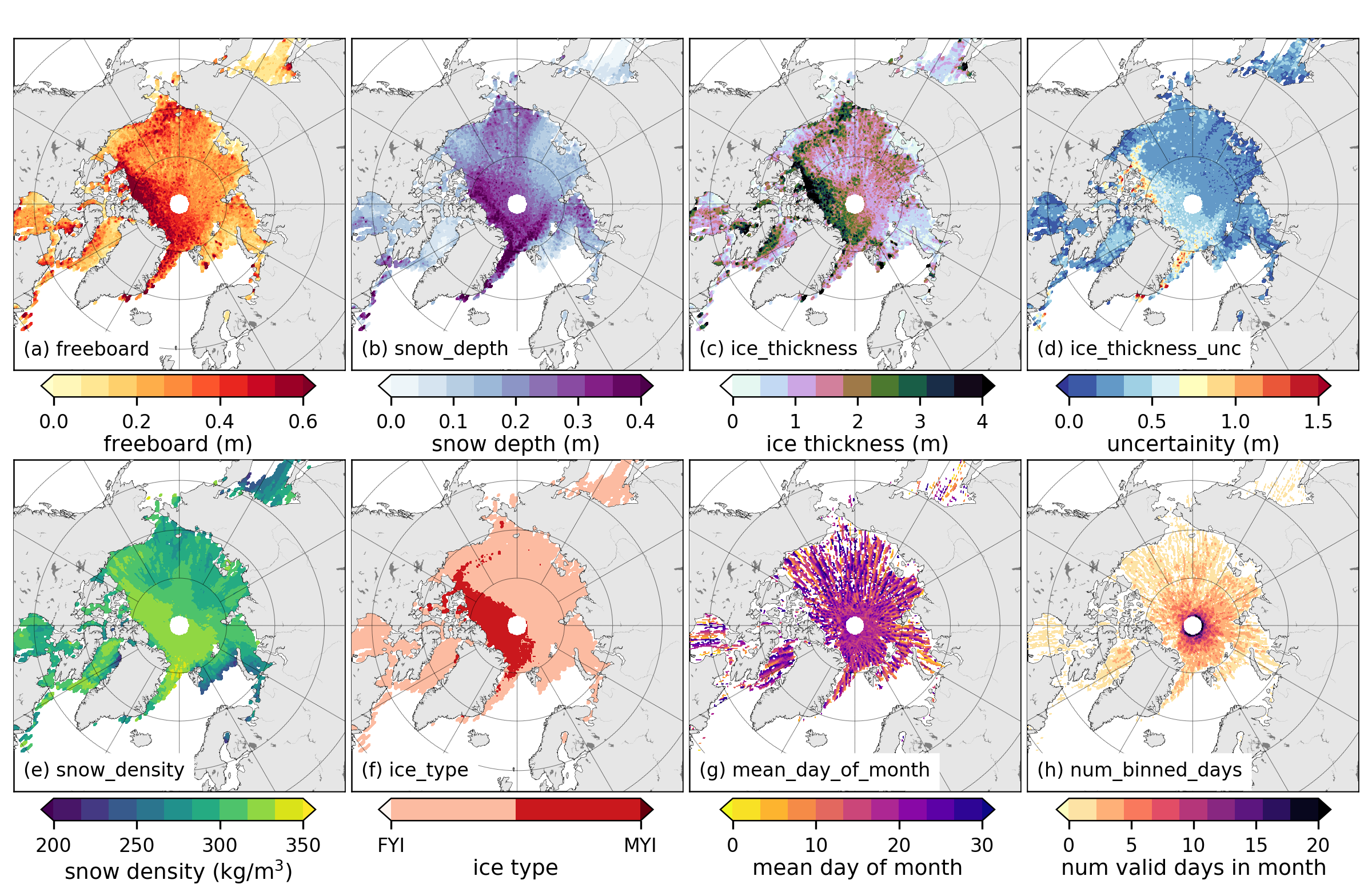