Using ICESat-2 and CryoSat-2 freeboards, we examine the variability of monthly Arctic sea ice snow depth, ice thickness and volume between October 2018 and April 2021. For the three years, satellite-derived estimates captured a decrease in mean April snow depth (~2.5 cm) and ice thickness (~0.28m) equivalent to an ice volume loss of ~12.5%. Results show greater thinning of multiyear ice with an end-of-season thickness in 2021 that is lower by ~16.1% (0.50m), with negligible changes in first-year ice. Over the period, sea ice thickness estimates using snow depth from climatology result in thicker ice (by up to ~0.22m) with a smaller decrease in multiyear ice thickness (~0.38m). An 18-year satellite record, since the launch of ICESat, points to a loss of ~6000km<sup>3 </sup>or one-third of the winter Arctic ice volume driven by decline in multiyear-ice coverage in the multi-decadal transition to a largely seasonal ice cover.

The data release 004 of ICESat-2 was used to generate this product. It covers the period between October 2018 and April 2021. The fields are on a 25-km grid. The Arctic Ocean is defined as the region bounded by the gateways into the Pacific Ocean (Bering Strait), the Canadian Arctic Archipelago (CAA), and the Greenland (Fram Strait) and Barents Seas.

The files can be downloaded here. 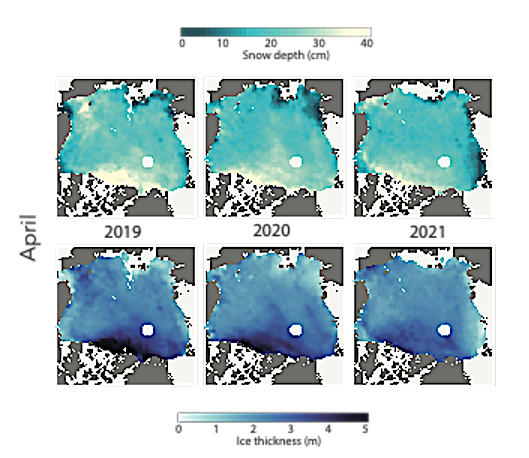