Where on Earth is ICESat-2?  Track ICESat-2 with the App.

NASA’s Ice, Cloud, and land Elevation Satellite-2, or ICESat-2, is currently in a polar orbit around Earth sending green laser pulses to measure elevations of Earth’s ice, land, water, trees, and more. The Advanced Topographic Laser Altimeter System (ATLAS) instrument aboard pulses a green laser 10,000 times per second. ATLAS measures the precise travel time of single photons from their release from the satellite that bounce off Earth’s surface and return to the satellite giving us a precise height measurement of our Earth. 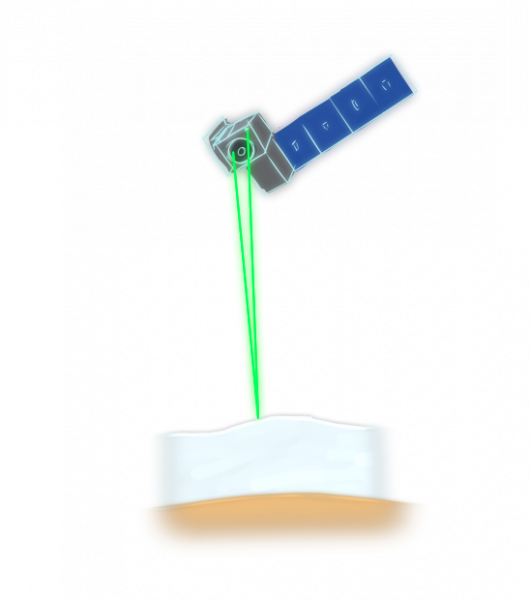 The laser is split into three pairs of beams with footprints on the ground of approximately 17 meters (56 ft). You can find out when and where the tracks may be on the ground near you or at any location on Earth.

ICESat-2, the App, was created and produced by a NASA ICESat-2 Intern* in 2019. Then in 2020, the app was further developed for Android by another ICESat-2 Intern* and released on the Google Play store. The iOS version is now available on the Apple Store.

The App allows you to see where on Earth ICESat-2’s path will occur with a visual map display or list view. Just select an area with your zip code, or latitude and longitude. The app will display the date and time ICESat-2 will be passing over.

ICESat-2 the app is a useful tool for planning a height observation coinciding with the satellite overpass, and also for knowing where elevation data for a specific area will be available. This flyby information also helps students, teachers, and citizen scientists take more valuable tree height measurements through the ICESat-2/GLOBE Trees around the GLOBE citizen science campaign.

Get the app for Android on the Google Play Store.

Get the app for iPhone/iPad on the Apple App Store.

See a comparison visual of ICESat-2 measurements on a football field.

*Original App created by Emme Wiederhold in 2019. Android version of the App developed and implemented by Edward Jahoda in 2020.