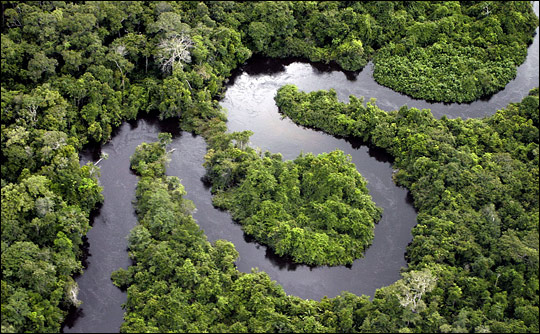 Land surface waters play an important role in the earth system and directly affect society that uses this natural resource for several activities. But population is highly vulnerable to water related natural hazards as floods, especially in underdevelopment nations. For example, at the Amazon basin, important extreme hydrological events have occurred recently, for instance, the 2009, 2012 and 2014 floods and the 1996, 2005 and 2010 droughts causing several impacts on local population.

While the new satellite altimetry techniques, as proposed by ICESat-2 Mission, provide a great advance for monitoring surface waters from space, hydrologic and/or hydrodynamic models (e.g. Paiva et al. 2013a, Neal et al 2012 may be one of its main predictive tools. Such models offer ways for understanding and predicting hydrologic processes, hydrological extremes as floods and droughts, and also impacts of anthropogenic pressure such as deforestation and climate change. However, its predictions are still imperfect due to uncertainty in model structure, parameters and input data.

The question being addressed by recent research is how to use new altimetry satellite data to improve the knowledge of river hydrodynamics and develop better model predictions of hydrological extremes, and future ICESat-2 products (as ATL13) have a great potential for that considering its enhanced spatial resolution. Efforts from the authors of this proposal using past satellite missions include studies regions where in situ monitoring is difficult and for this reason satellite data has a great value. For example, O’Loughlin et al. (2013) that used ICESat altimetry data to perform a hydraulic characterization of the middle reach of the Congo River, including river slopes. Also, Paiva et al. (2013a) used water surface elevations from ENVISAT satellite to analyze errors from a hydrology/hydrodynamic model of the Amazon River basin and Paiva et al. (2013b) assimilated such data to improve this model that was later tested for hydrologic forecasts.

The focus of this research is on the (i) direct estimation and use of river hydraulic variables, e.g. water surface elevation and water surface slope, to improve river hydrodynamics knowledge using ICESat-2 and (ii) integration of ICESat-2 river measurements (e.g. elevation and slope) with hydrology/hydraulic models (e.g. Paiva et al., 2013b; Neal et al., 2012) to improve its predictions and forecasts (e.g. floods). The emphasis is large basins where in situ monitoring is difficult and for this reason satellite data has a great value, namely the Amazon, Congo and Niger River basins, all located at underdevelopment countries where knowledge of river hydrodynamics is still poor or hydrologic forecasts are still under construction. In all cases, outputs from this research may help the transfer techniques related to ICESat-2 data to local organizations (e.g. ANA – Brazilian National Water Resources Agency, CPRM – Brazilian Geological Survey, CICOS – International Commission for Congo Oubangui and Sangha Basin).